In my previous post, I expressed some characteristics of well written tests. In this post, i’d like to show some techniques to help achieve these characteristics. In a future post, I’ll try to focus more on techniques and patterns to avoid.

I’m going to use an extremely simplified example to demonstrate some of the techniques here.

Here’s the example, including all the classes involved that i’m going to talk about in the next chapters: 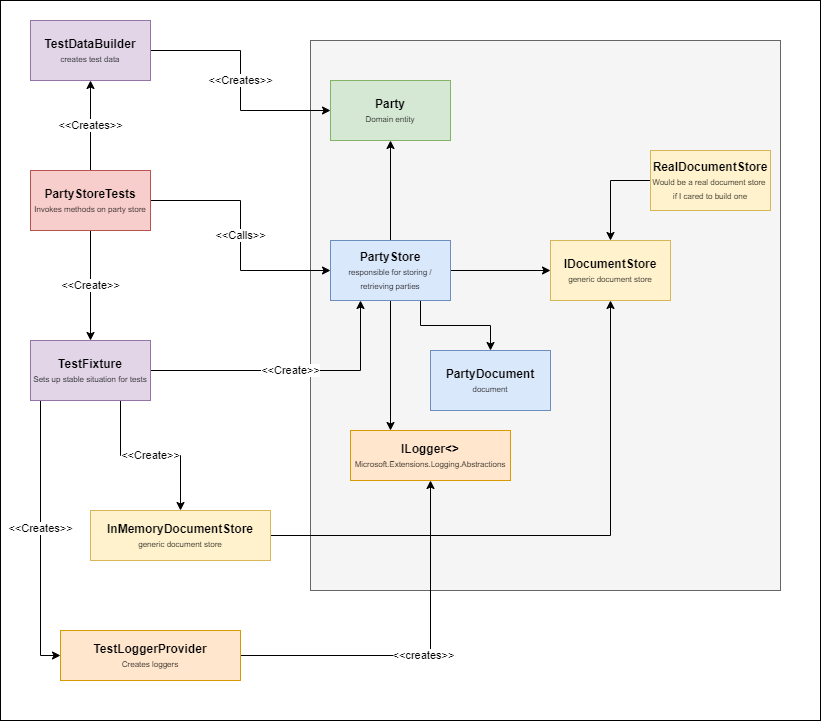 In this example, we’re testing a system to create registrations for a party.

Have a look here for the code accompanying this post.

The example is a bit contrived but I found it a challenge to come up with something that is both useful to explain the topic, but small enough not to distract from the concepts. So, I’m only including a domain object and a store to save it. No http api, command handlers, query handlers, etc. Maybe I’ll enrich the example for future posts.

Duplicating the construction of your classes in each test case makes maintaining your tests much harder. When you need to change the dependencies of your test, all of a sudden you have to modify dozens of tests. Not fun at all!

I very much try to hide things that are not relevant for my tests in helper methods (if I can only re-use them in a single test) or in a separate fixture class. I find that this has several big benefits for me:

Here’s an example of the fixture:

The fixture creates instances of all classes needed, including all required dependencies, such as the PartyStore and the test double InMemoryDocumentStore. Should the number of dependencies change, you only have a single place to modify here.

The test creates the fixture in the constructor. This makes sure we don’t have any shared mutable state.

One of the techniques that I find most valuable in unit testing is the use of Test Data Builders. There are libraries to help you to build test data, such as AutoFixture, but I tend to create my test data by hand.

The instances created by the test data builder should be valid:

A couple of rules I’m following for test data builders.

I’ve found that, while autofixture or Faker can sometimes generate more realistic test data, it’s not realism i’m looking for, it’s predictability. So, for properties where I really don’t care what the value is, i’m using a helper method that uses the name of the property to build a value. IE: AttendeePresentJohn => #attendee_present_john#

Within your unit tests, you have the need to control the values that you’ve just built. In the party example, I would like to be able to change the name or the number of attendees. I find the with syntax very valuable for this.

This approach has several benefits:

I sometimes see people create huge test data builders, with specialized extensions for each property they want to manipulate. The problem of this approach is that it requires a lot of coding to build this, whereas the language can just accomodate this .

I hope you can see how this pattern improves maintainability of tests.

With syntax before records

Before records came to c#, I used a simple extension method for this. It doesn’t work with immutable data unfortunately but the resulting syntax works just as well.

When it comes to asserting things in tests, I often see people writing long lines of assertions, where each property is asserted separately.

I very much recommend against this. While it seems very precise, the problem comes when you are maintaining your software. Adding a property will NOT break your tests, so developers often forget to add the property. You now have a blind spot in your test, which makes your tests less likely to catch issues.

When you have to change the definition of your class, you now also have to modify several tests, because each test has assertions for each property. If you have to change many tests to do a change, you are also undermining the reliability of your tests.

My recommendation is usually:

Now this is not always possible or practical (for example, when you have non-deterministically generated values in your code) but it’s a good thing to strive for.

I’m not asserting that the individual property values are valid. Instead, I’m asserting against an expected result object. In this case, it’s really simple, because the shape is the same between the input / output.

When the shape is not the same, this is where a the Test Data from the previous paragraph shines.

Handling non-deterministically generated values is a bit of a challenge. Some assertion frameworks (such as fluent assertions or Verify) have methods to compensate for this.

Controlling Datetime.Now in your tests is also a really important aspect (I’ll go more into that topic in a future blogpost) but if you control what now means to your code, it makes the output of your tests soo much more deterministic.

The last thing I’d like to address is logging in unit tests.

In .Net, the default way how you add logging is to add ILogger

The way people mostly analyze problems in production is by adding logging to their system. Debugging in production is often not possible, so the logs are the only way you can analyze a problem.

If logs are very important to analyze a problem in production, why not use them to analyze problems in your unit tests? I often see people inject a NullLogger into their classes when testing. This is such a wasted opportunity. By writing the log output to a console (or in my case, the ITestOutputHelper from XUnit), I get a detailed log for everything that happened in my tests.

One of the least fun things is when you have a test that succeeds locally, but fails on the build server. Having detailed log output from your test can mean all the difference.

To get log output in my unit tests, I typically use a TestLoggerProvider, which simply pipes log output to XUnit ITestOutputHelper. Then I add a couple of tricks, such as, change the output format to be more helpful for me, such as printing the elapsed time, not the date time (which is not very valuable) or pretty printing exceptions with all properties.

The benefit of using XUnit ITestOutputHelper is that all output is correlated to a test. If you simply write using Console.Write and or a Static Logger, then your test output is not correlated with a specific test.

I’ve given several patterns that I’m using over and over again in my unit tests. I’ve found these practices to greatly improve the maintainability of my tests and improve the speed at which I can develop software. So I hope they help you as well.